Captain America takes on Batman in an epic piece of Marvel vs. DC fan art. When you think of comics, superheroes, and big-budget movies, the first studios that come to mind are Marvel and Warner Bros (DC Films). Their relationship is rooted in a nearly 80-year publishing rivalry between Marvel and DC Comics. The spandex-clad heroes so many grew up reading about in masterfully-crafted panels have become perhaps the biggest headliners at cinemas around the world (especially in recent years).

Even before 2008’s Iron Man gave birth to the Marvel Cinematic Universe, comic book movies were all the rage. The 70s, 80s, and 90s saw a rise in popularity of DC characters with Superman and Batman films. 2000’s X-Men not only threw Marvel’s hat into the ring but launched two decades of superheroes being taken (more) seriously; franchises like Sam Raimi’s Spider-Man and Christopher Nolan’s The Dark Knight trilogies changing the game. Marvel Studios took a significant leap when they launched the MCU (a cinematic adaptation of the comic book universe). To directly compete with this Warner Bros., the DC Extended Universe and then their subsidiary studio, DC Films.

While Man of Steel and Iron Man was Marvel Studios’ and DC Films’ first outings, Justice League and The Avengers are the official amalgamations of the MCU and DCEU. That said, DC’s Batman and Marvel’s Captain America are as central to those universes as Clark Kent and Tony Stark. This is because Steve Rogers and Bruce Wayne are the leaders of their respective teams of superheroes: the Avengers and Justice League. Freelance artist, Pablo Ruiz recently posted a picture to Instagram featuring those leaders; this new epic piece of fan art sees Chris Evans’ Captain America and Ben Affleck’s Batman go head-to-head. Check it out below.

The chances of seeing Steve Rogers meet Bruce Wayne is slim; Chris Evans passed on his shield in Avengers: Endgame and Ben Affleck has hung up his cape and cowl. On top of that, the studio rivalry rages on as Warner Bros. finds their way. In the same way that Captain America gets the jump on Batman above, Marvel has had much more success with their universe than DC. The popularity of films like Wonder Woman, Aquaman, Shazam!, and Joker has now prompted Warner Bros. to focus more on one-offs. Even if Matt Reeves’ The Batman serves as a spiritual reset for the DCEU, a silver screen DC vs. Marvel crossover where Batman bests Captain America will exist only in our imaginations.

Leader of the Avengers, Captain America takes on the leader of the Justice League, Batman in a piece of fan art symbolic of the Marvel/DC rivalry. 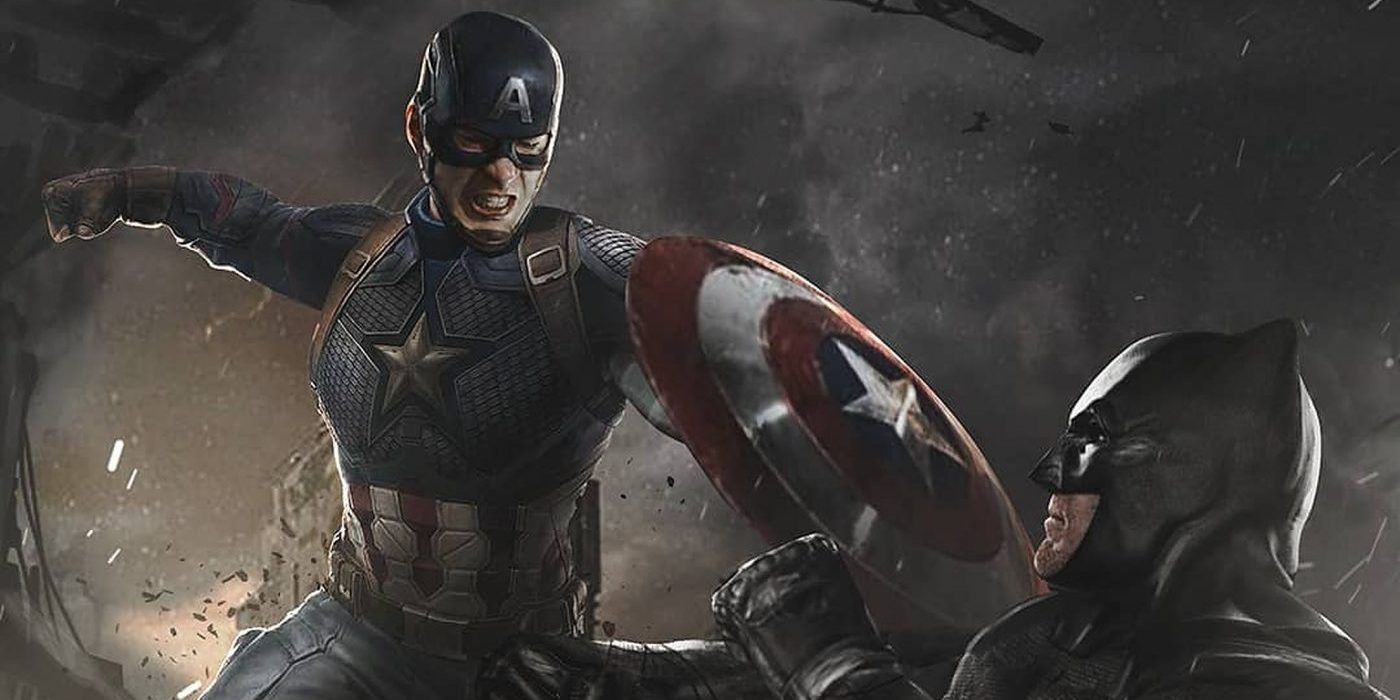