Harry Potter: 10 Pieces Of Hermione Granger Fan Art Worthy Of The Brightest Witch Of Her Age

The rest is left to interpretation. Hermione is a character loved and admired by many, and the magic of novels is that they are worlds crafted by the imagination. These 10 pieces of fan art pay tribute to the brightest witch of her age and open portals of possibility.

This wonderfully vibrant watercolor fan art shows a familiar narrative. Hermione reading a book. Which book? Hogwarts, A History. It can’t get any more Hermione than that. The details in this piece don’t scream at the viewer, rather, they add subtle meaningful references.

There is a lion on the carpet and neck of the lamp, Gryffindor colors lining her robes, and a magical portrait reading along.

9 Brightest Witch Of Her Age

Ron and Harry know they wouldn’t survive in their battle against Voldemort without Hermione. Just a few of the things she contributed throughout the years include figuring out Snape’s potions riddle, leading them to the Basilisk, punching Draco, using the Time-Turner, helping Harry with the Triwizard Tournament, using an undetectable extension charm on her bag during their hunt for Horcruxes, and risking her life, just to name a few.

The movies can’t include everything; even if they try, there isn’t enough time to give satisfying focus to every detail. But it was unfortunate for one story, in particular, to be cut. In Harry Potter And The Goblet Of Fire, there was a house-elf named Winky who was framed for creating the Dark Mark at the Quidditch World Cup. Winky went to work in the Hogwarts kitchens and eventually became a drunk, though they none the less determinedly helped by Dobby. Hermione was witness to these acts of injustice and founded the Society for the Promotion of Elfish Welfare, or, as Ron likes to point out, S.P.E.W.

The Hogwarts Houses are misunderstood. People coin Ravenclaw as simply meaning good grades and a smart intellect, Hufflepuff as the slackers and happy do-gooders, Slytherin as the pureblood, upper-class bullies, and Gryffindor as the proud, reckless adventurers. Hermione isn’t a member of Ravenclaw house.

RELATED: Harry Potter: Hermione’s 10 Biggest Mistakes (That We Can Learn From)

She doesn’t have such an open mind or creativity and can be quite stubborn and rigid in her ways of thinking. She belongs to those of daring, nerve, and chivalry. She is fierce and has courage, as well as strong convictions. She chose to be in Gryffindor, just as Harry did it.

Hermione was born of two muggle parents, similar to the character of Lily Potter. But, despite being born of non-magical parents and being called a Mudblood by Draco Malfoy, she became the brightest witch of her age. Her thirst for knowledge of the magical world often attributed to her skill and calm mind in threatening situations and sought consultancy from the simplest to most troubling problems.

The artist of this affectionate piece quoted a reference from the novel Harry Potter And The Prisoner Of Azkaban, in her caption. ”He’s gorgeous, isn’t he?…. Poor Crookshanks, that witch said he’d been in there for ages; no one wanted him. ”

The are some things about Crookshanks that are only revealed in the books, as they weren’t included in the movies. Crookshanks is half Kneazel, half cat, making home especially good at investigative work. He was aware that Peter Pettigrew was disguised as Scabbers and made several attempts to snuff out the traitor, something briefly shown in the film. Harry also wakes in the middle of the night to see Crookshanks in the presence of a black dog, later known to be Sirius Black, an innocent. The cat was also a worthy pet, protecting Hermione at times, and guiding her and Harry to the entrance of the Shrieking Shack.

Hermione Jean Granger, born to Mr. and Mrs. Granger, a student of Hogwarts School Of Witchcraft and Wizardry, and, in later life, a highly influential and great presence in the Ministry of Magic. Her wand was made of vine wood and contained a dragon heartstring.

RELATED: Harry Potter: 16 Worst Things That Ever Happened To Hermione

During her time battling the dark arts she was petrified, accused of being a romantic tease, abandoned and judged by her friends, tortured relentlessly, and sought after for being a wanted criminal.

This wonderful and lively fan art has captured the moment Hermione casts the Patronus Charm. Hermione’s Patronus is an otter, one of J.K. Rowling’s favorite animals. Its luminous lighting casts a blue glow over the entire image, enhancing the magical feel. The drawing is full of fun elements that draw the eye such as Dobby with his multiple hats and assortment of odd clothing, a picture frame with a leering Umbridge, various potions, an admiring onlooker, and books to fill every corner.

This warm and cozy fan art pays homage to Hermione’s love of literature. “When in doubt, go to the library.” Some of the answers that were found through the use of books: The Basilisk and information about it, Nicolas Flammel and what was being guarded in Hogwarts, how to stay underwater during the second challenge in the Triwizard Tournament, and the history of Dumbledore.

The artist of this bewitching and eerie fan art quoted Pottermore in their caption. “The Polyjuice Potion, which is a complex and time-consuming concoction, is best left to highly skilled witches and wizards. It enables the consumer to assume the physical appearance of another person, as long as they have first procured part of that individual’s body to add to the brew (this may be anything—toenail clippings, dandruff, or worse—but it is most usual to use hair). The idea that a witch or wizard might make evil use of parts of the body is an ancient one and exists in the folklore and superstitions of many cultures. The fact that Hermione is able to make a competent Polyjuice Potion at the age of twelve is testimony to her outstanding magical ability because it is a potion that many adult witches and wizards fear to attempt.”

Often considered to be one of Hogwarts’ best and brightest, here are 10 amazing pieces of Harry Potter fan art that celebrate Hermione Granger. 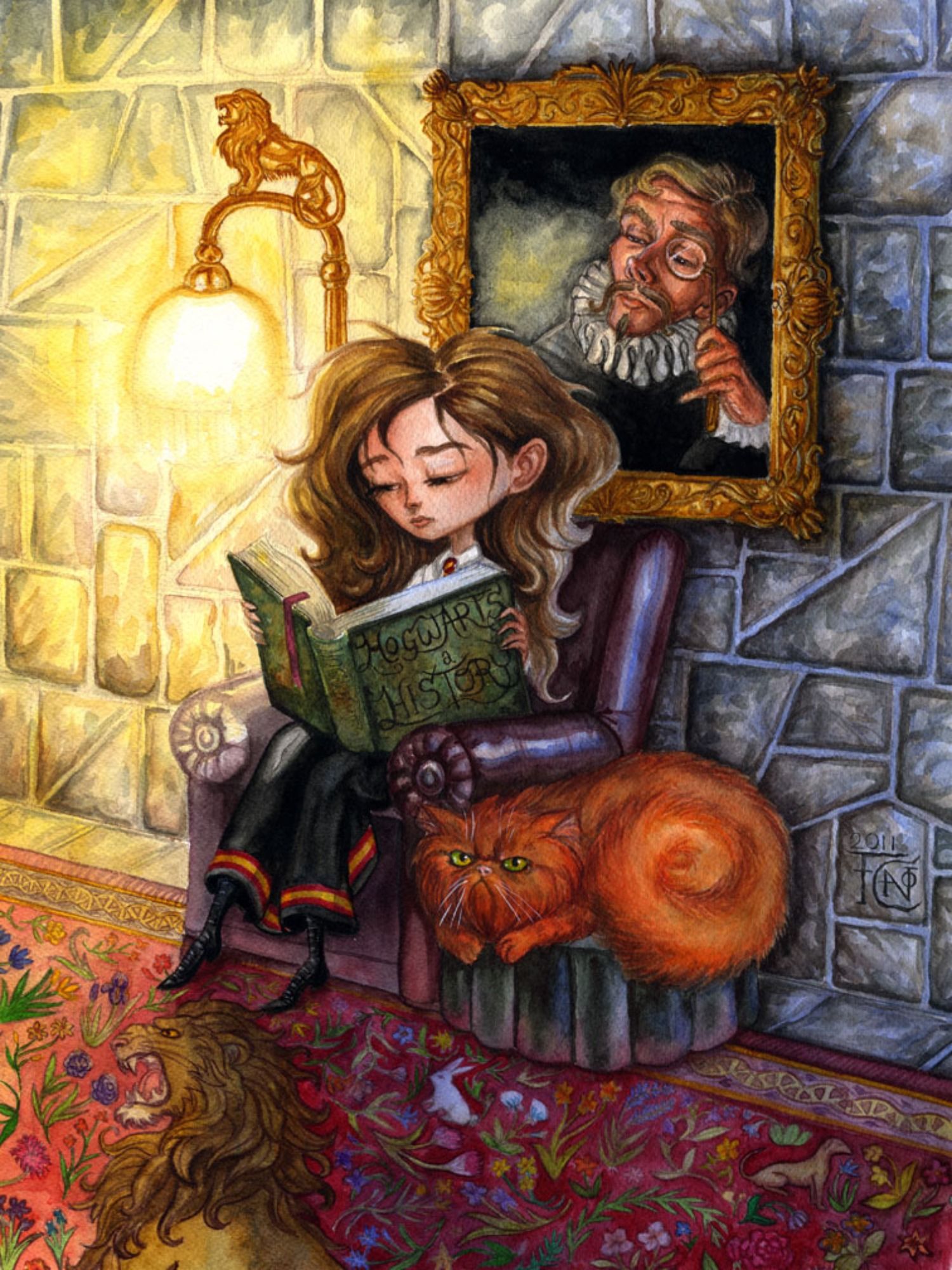