Star Wars: The Clone Wars – 5 Reasons It Was Better Than The Movies (& 5 The Movies Were Better)

Star Wars: The Clone Wars enjoyed a well-received run as an animated TV series, due largely to the fact that it was based on such a content-rich time period within Star Wars canon. The show came out following the last chapter of the prequel trilogy, Revenge Of The Sith, and helped bridge the gap between that film and its predecessor, Attack Of The Clones.

Now that the series has officially wrapped up with a final seventh season released earlier this year, it’s time to compare The Clone Wars to the Star Wars films it was based on, and see which side holds up. Here are five reasons why The Clone Wars was better than the movies, and five reasons it can’t compare.

This one is a no-brainer, given the freedom of crafting storylines within a seasonal framework. As such, The Clone Wars was able to serialize key stories and sub-plots in order to add more content to the time period in question. It wasn’t just about the war, but the actors behind it, and their respective goals.

It also allowed the series to explore elements of the Jedi/Sith conflict that was the main catalyst for the Clone Wars, themselves. More elbow room meant that writers had plenty of opportunities to give Star Wars fans the kind of stories they deserved.

Most Star Wars fans will undoubtedly side with live-action over animation, any day of the week. While The Clone Wars TV series relied on the strength of its characters and stories, it fell short in the visual department.

After all, Star Wars films epitomize the limits of digital technology, whereas animation tends to be limited in what it can produce. Although the show didn’t suffer from a critical perspective, fans can only imagine how much better the series would have been if it were shot live.

The Clone Wars didn’t just draw upon the Star Wars movies – it siphoned content from the wellspring of canon that dates back thousands of years within its own lore. This is a stark contrast to the films, which kept their perspective firmly rooted in their modern settings.

It was incredible to see Yoda visit Moraband and face down the spirit of the dreaded Sith Lord Darth Bane, who crafted the Rule Of Two. That’s just one example of the kind of fan service paid to Star Wars audiences by a writing team that wasn’t afraid to pull from the source material.

Writers have a bad habit of painting themselves into the proverbial corner, which The Clone Wars did a few times throughout its multi-season run. It’s difficult to square Anakin’s multiple run-ins with Count Dooku following the former’s defeat in Attack Of The Clones, only to hear him say “My powers have doubled since the last time we met, Count,” in Revenge Of The Sith.

RELATED: Star Wars Vs Lord Of The Rings: 10 Highest-Grossing Movies, According To Box Office Mojo

Eventually, fans take notice, and begin asking questions similar to the ones posited in the prequel trilogy, such as Darth Vader not recognizing C-3PO. When writers start hastily crafting explanations to deal with continuity errors or illogical plot twists, the results can be murky, at best.

Darth Maul was a saving grace within the ill-received first prequel film The Phantom Menace, and has soldiered on as a fan favorite that Star Wars audiences can’t seem to get enough of. The Clone Wars brought his character back, and made him an active opponent to his former master, Darth Sidious.

Not only would Maul’s return give fans the chance to see him truly live up to his potential as a character, but his story arc would follow cleanly through to the Rebels animated series, where he finally met his end in the most poetic and respectful manner imaginable. Truly a highlight of the series.

When The Clone Wars feature film came out, audiences were bewildered to see a rather annoying padawan named Ahsoka Tano emerge as Anakin Skywalker’s apprentice. It was an awkward fit from the start, with Ahsoka desperately trying to act as a viewfinder for the audience, while that same audience remain puzzled as to what purpose she served.

It didn’t seem to fit with the Star Wars films, either. After his defeat at the hands of Count Dooku in Attack Of The Clones, it seemed incomprehensible that the Jedi Order would have allowed Skywalker to take a padawan at all, given his fragile emotional state.

Eventually, the writers must have realized Ahsoka’s presence in the show was causing issues. Soon, they started writing her with wit and cunning, which ended up reversing her initial ill audience reception. Ahsoka became a favorite among Star Wars fans, especially as the series progressed.

Her sharp character arc involving her abandoning the Jedi Order would quickly become a linchpin not only for the series, but the films as well. Season seven showcased Ahsoka’s participation in the events following Order 66, while setting up her Fulcrum character arc in Star Wars: Rebels. It took the long way ’round to get there, but she now fits nicely within Star Wars canon.

While the show centered primarily around the actual military campaigns that made up the bulk of the Clone Wars, it seemed that secondary characters were too often sidelined, when they should have played a more active role.

The one character who suffered this treatment the most was undoubtedly Padmé Amidala. Though she would turn up in a few episodes, her character was largely left on Coruscant while the primaries gallivanted around the galaxy. Her involvement (along with several other characters) might have strengthened the story from more than just one side.

Hayden Christensen’s portrayal of Anakin Skywalker never really hit the mark until Revenge Of The Sith, which gave the actor the opportunity to truly let loose with the character. That being said, the story had fulfilled the character’s arc sufficiently to set up his eventual metamorphosis into Darth Vader.

RELATED: Star Wars: 10 Most Googled Questions About The Series

The Clone Wars was able to expand on that transition even farther. Anakin’s relationship with Ahsoka, his friendship with Obi-Wan, and his multiple acts of hatred and evil would all play important roles in shaping the character, and providing more backstory regarding his eventual fall to the Dark Side.

While The Clone Wars was arguably meant to be an all-ages show, it too often pushed the boundaries of what would normally be considered PG-13 material. Children’s humor would flip-flop with violence and dark imagery on a continual basis, making it impossible to nail down the target audience.

For all the stabbings, shootings and beheadings the series offered, there’d be equal amounts droid humor, or a storyline involving a squealing baby Hutt. This problem was largely prevalent in the entire prequel trilogy, which worked against it from a critical perspective. Seeing it happen on a seasonal basis made it even more difficult.

NEXT: Star Wars: 10 Things You Never Knew About Bossk The Bounty Hunter

The prequel Star Wars films are often compared to the hit animated series, The Clone Wars, with strong arguments for each side. 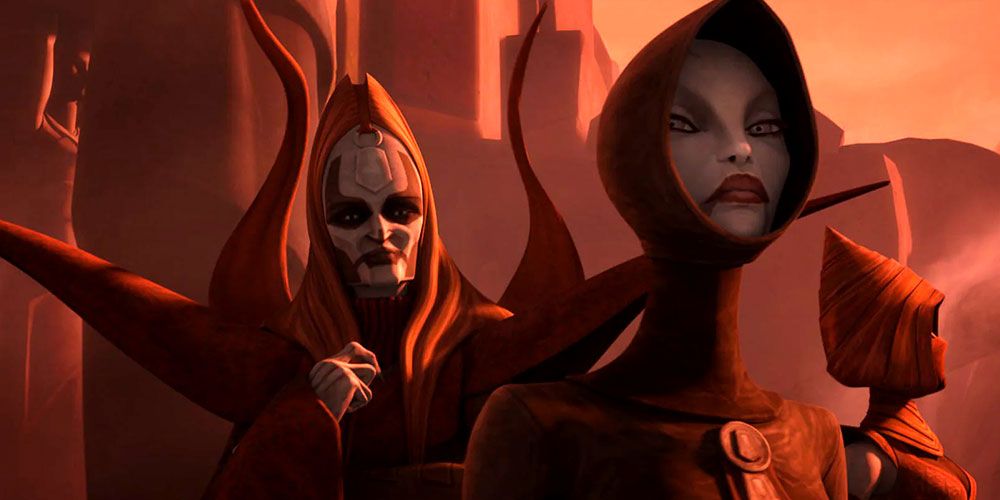